Judy said that Dad talked in his sleep the other night. He commented, very clearly,

"I'm in a beautiful garden, shackled by chains."

It seems that what he can't express when he is awake, comes out loud and clear from his subconscious at night. How sad.

Posted by Dreaming at 3:04 PM No comments:

This is a post I had on my "Living a Dream" blog. I felt I should cross post it here.

That lady who feeds me put me in the car, without Tucker. At first I was a bit nervous, thinking we might be going to that place that smells terrible and where I get shots. 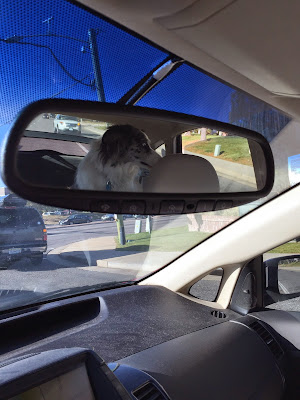 But we passed by that stinky place and kept driving.
I became curious and more curiouser about where we were going. 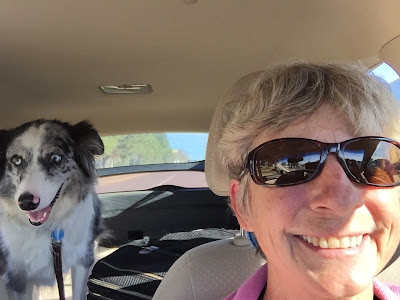 We went into a huge building.
Then we went into a small room with doors
that opened and closed all by themselves.
I wasn't happy with the way my tummy felt
when I was in that tiny room with the funny doors. 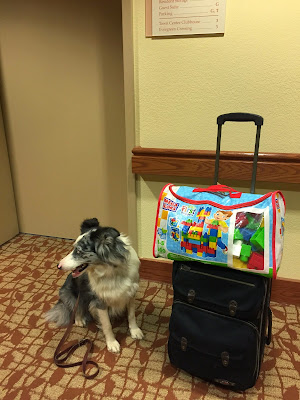 We went around a corner and down a long hall.
There were all kinds of interesting smells.
I could smell a cat behind one door.
There was a dog behind another door.
She barked at me.
Then we went into a place where there was
a man called, "Dad". 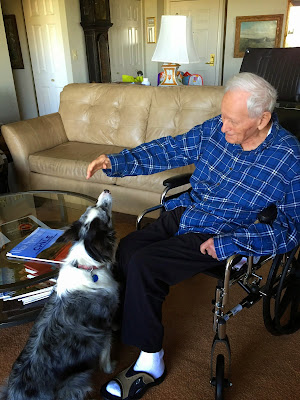 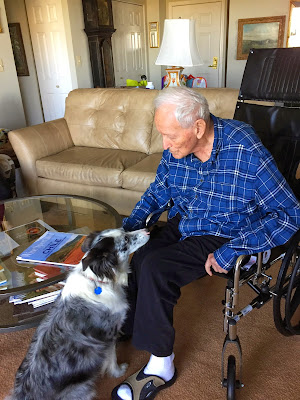 We had a fine visit. 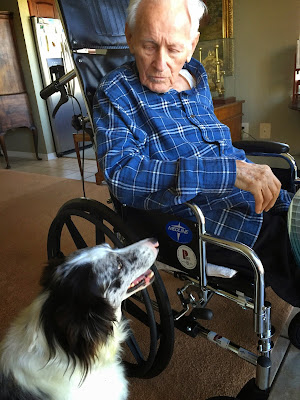 Gone With the Wind

A few days ago I stopped by Dad's place to take Judy to lunch and then for a massage. Instead of meeting Judy outside of the complex, I decided to go to their apartment (since I was early) and have a chance to say, "Hi!" to Dad. He was at the table, in his pajamas, having recently finished breakfast. I gave him a hard time about his wardrobe. He responded with two or three words that made sense, followed by several words of mumbo jumbo. I asked him something else, and got a similar response. Often what he says doesn't always make sense, but the syntax of his speech is always correct. This new speech pattern was totally different. His statements almost always began with three words that were correct, such as, "Say, I need…" followed by several rhyming words and then a string of words beginning with the same consonant. So his complete sentence might be, "Say, I need vegan jeegan delta dingy doggish."

I asked Judy if this was new. Apparently, he was fine when he got up and through breakfast, and had just recently begun to have the communication issue. As we talked about this, Dad seemed to slip further away from the here and now, and continued his gibberish. Each statement continued to follow the pattern of several words in correct context, some rhyming words and then a string of alliterative words. In hindsight I wish I had recorded his speech. It was really quite fascinating.

Dad was seated in a dining chair that has wheels, and he kept trying to scoot away. Judy and I were seated on either side of him. If we asked him a question, such as, "Do you want to go sit on the couch?" He'd respond in his new pattern. We had no clue what he was really trying to say. Finally we were able to turn his chair to face the table and he put his head down on the table. He swore a few times. Sometimes when we asked if he was hurting he'd respond in the affirmative. Several times he indicated that his head hurt. However, other times he would say he didn't have any pain. Dad remained slumped over, alternating with having his forehead on the table, or having his head on his hand. Periodically he would lift his head and look out with bleary eyes. It wasn't clear if he really saw anything or even knew if we were there.

While this was happening Judy and I were watching the swift approach of a sever thunderstorm. The skies darkened. Thunder boomed and the sky lit up. The wind began to whistle and shake the windows. The tree outside the window was being whipped and small branches were flying loose. The rain pelted the windows. Hail began to pound down. Dad became unresponsive. He didn't lift his head. He swore occasionally, but didn't talk to us much. Judy and I shared concerned looks over his head. As the storm worsened, and Dad's conditioned worsened, the rain outside was matched by the tears in our eyes.

The storm blew past and the sun began to shine on the mountains to the west. The sun made its way to the grounds outside the window and a crew of grounds-keepers who had been chased inside, came out to resume their task of trimming the shrubs and cleaning up the branches and leaves.

Dad sat up, blinked his eyes a few times, and commented about how the men were raking the leaves and branches. His speech was perfect. He was 'in the moment'. He made perfect sense. He turned to Judy and asked about lunch.

If I were more spiritual, I would argue that the storm was a manifestation of the angels' frustration and anger when they came to take Dad, and he refused to go. His will overpowering them.

It makes a great story….

Disregarding the spiritual aspects of this experience, one might come to the conclusion that my father experienced a TIA. It explains the behaviors we saw.

But having watched Dad slumped over, with his head on the table. Having heard him swear. Having seen the miraculous transformation that came about as the storm passed…

I first noticed this last Christmas. On Christmas Eve our family celebrates with a Swedish smorgasbord. Generally I begin with hors d'oeuvres items, then I add items to the table; first some breads and cold cuts, then meat balls and potato salad, and finally dessert. We each dish up a small plate of food and sit in the living room, and begin the gift exchanges, going back for new foods as they are set out. 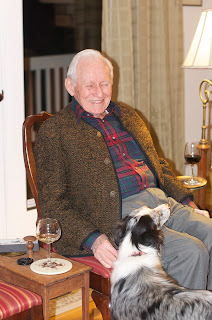 Not too long ago we went out to lunch with some friends. Dad had a burger with all of the fixings. He also had a very clean plate when he was finished. He ate everything, every crumb, every piece of the tomato and every little bit of each leaf of lettuce. Oh, and he also would have eaten my dessert had I let him!

When I have been visiting him, he will often ask Judy what they will be having for dinner. When she responds, he will say, "Let's go!" He is ready to eat, even though it may only be 2:00 PM. Many times as I come in and sit down he will ask when we are heading out to the restaurant for dinner. He gets so disappointed when I explain that we won't be going out, that I will be heading home to make dinner for my husband and myself.

Dad and Judy came for a lovely Thanksgiving dinner. He enjoyed his meal and was always an eager participant in seconds! But, I purposely did not begin with appetizers and we served the food buffet style, so the serving dishes were out of sight... and mostly out of mind!

I am theorizing that some of the behavior I am noticing may be due to the fact that Dad was always a busy man, and he now finds reading, working on the computer or writing too difficult to attend to. Therefore, nothing is occupying his time, so... might as well eat!

Posted by Dreaming at 9:14 AM No comments:

Email ThisBlogThis!Share to TwitterShare to FacebookShare to Pinterest
Labels: food

Dad's Getting Married in....

... well, not tomorrow morning, but he's gonna get hitched in January! Dad's lady friend has lived with him for more than two years. From the beginning of the relationship, Dad has wanted to get married. He often whispered to me, "Don't you think I should ask Judy to marry me?" After the disaster of his previous marriage, I would respond with a resounding, "NO!" I figured Dad would be content with things the way they were. But no, he is an old-fashioned kinda guy and in his mind men don't live with women, they marry them. In all of this, his lady friend has also been a bit reluctant to marry. So, I didn't feel badly about counseling Dad against a union.

However, he persists.
She has relented.
I see the love they share and I can't stand in the way.

How wonderful for Dad, at almost 92 years of age, to find someone who cares about him deeply and wants to be by his side!

Posted by Dreaming at 8:26 AM No comments:

Email ThisBlogThis!Share to TwitterShare to FacebookShare to Pinterest
Labels: marriage

How Does Your Garden Grow?

We took Dad to the Botanic Gardens the other afternoon. He seemed to enjoy the variety of flowers. We did too! 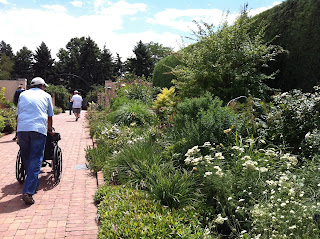 We used a wheel chair 'just in case'. Dad walked through much of the garden, pushing the wheel chair himself. When he got tired, and when we hit rough ground, or uphill treks, we took over the task of pushing.

We're looking forward to another trip in the future.
Posted by Dreaming at 9:53 PM No comments:

The Dog Dad Doesn't Have

Dad loves dogs.
Specifically, Dad loves Golden Retrievers.
Having a dog, especially a large dog in an apartment
would be a challenge for Dad. 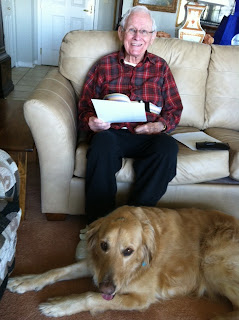 However, having a dog come visit is a perfect solution.
Meet Clyde. Clyde belongs to a friend of mine.
He is the biggest Golden I have known.
He is a bundle of love.
He knew exactly who's feet he should lie on! 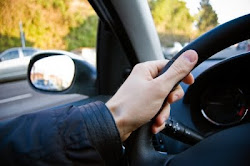 My dad thinks it was a conspiracy.

He is convinced that my step mom and step sister colluded to get him off the roads.

His doctor suggested that he have his driving evaluated by an independent agency.

The agency's conclusion was that my dad failed to pay attention to details while driving and should not continue to drive.

They did not take his license away but for legal reasons my dad decided not to drive.

So, who will drive my dad to the grocery store?

Who will drive my dad to the doctor?

Who will drive my dad to the post office?

My dad was diagnosed with
Alzheimer's Disease in 2009.
Here's the opportunity
for me to share:
the good,
the bad,
the funny,
and sad,
experiences of this
debilitating disease.

I am blessed to get to know my Dad, a wonderful 91-year-old 'young man'! When Dad began to experience memory issues and was diagnosed with Alzheimer's, I decided to chronicle my experiences with him. I currently live about 20 miles from Dad, having just moved to be a little closer. I began blogging a few years ago, posting sketches of my daily life, my fun with dogs, experiences with horses and life in general. You can learn more about me and my life by visiting that blog, which I call Living A Dream.
Thanks for coming by and reading my posts! Thanks, too, for leaving a comment.
Best to you, 'Dreaming'

Where in the world?